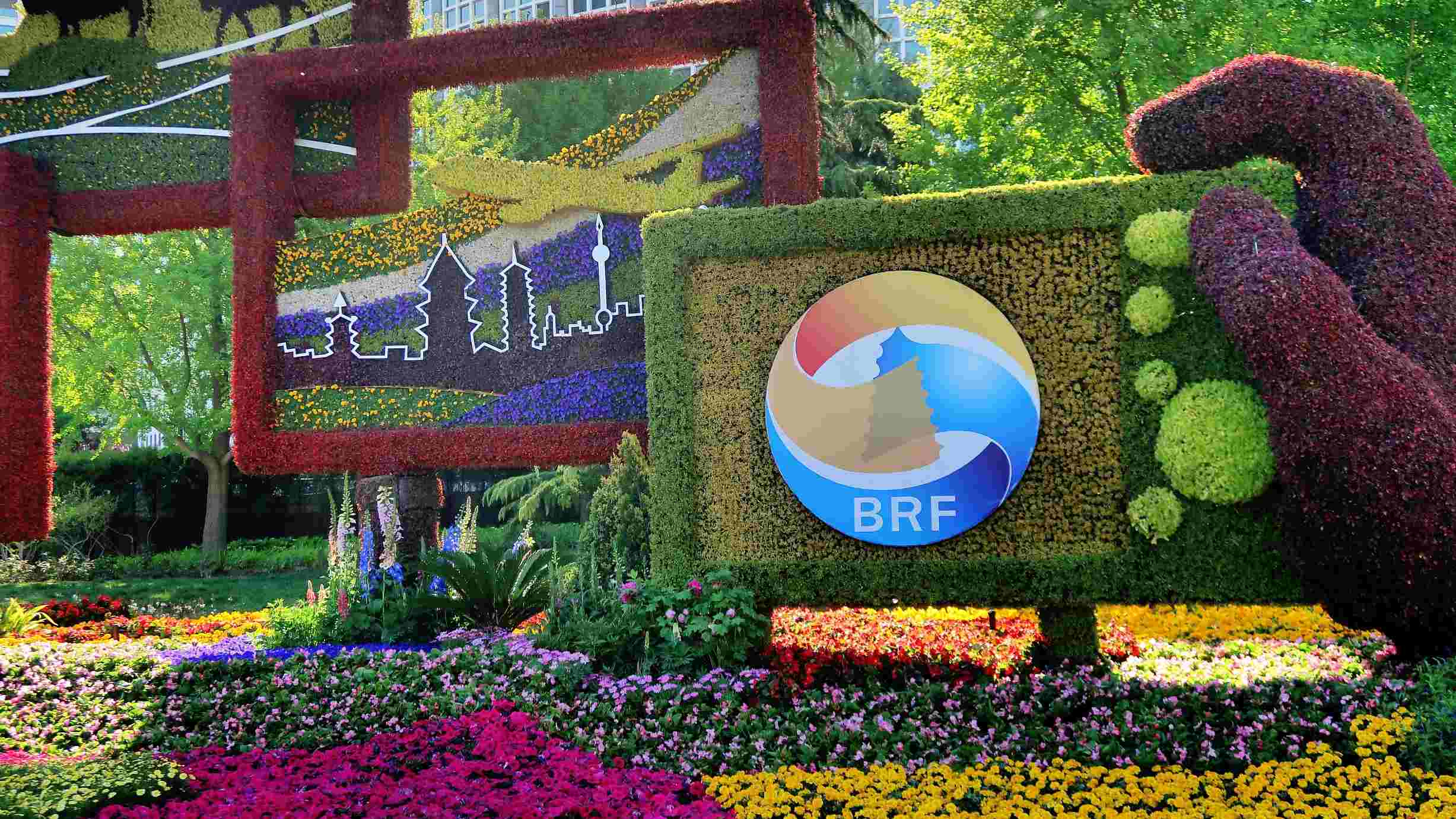 The Second Belt and Road Forum (BRF) for International Cooperation will be held in Beijing from April 25 to 27, Chinese State Councilor and Foreign Minister Wang Yi announced at a press briefing on Friday.
At the invitation of Chinese President Xi Jinping, Chilean President Sebastian Pinera, Mongolian President Khaltmaa Battulga, Nepali President Bidya Devi Bhandari, Portuguese President Marcelo Rebelo de Sousa and President of the Swiss Confederation Ueli Maurer will join this year's event and pay state visits to China respectively.
Austrian Chancellor Sebastian Kurz will also visit China and take part in the BFR event, according to a daily briefing by China's Ministry of Foreign Affairs on Friday afternoon.
With the theme of "Belt and Road Cooperation, Shaping a Brighter Shared Future," the second BRF aims to bring about high-quality cooperation under the Belt and Road framework.
More side events are planned for this year's forum, including 12 sub-forums focusing on practical cooperation. Also, a conference will be organized specifically for the business community for the first time.
Chinese President Xi Jinping will attend the opening ceremony and deliver a keynote speech, Wang said.
A total of 37 heads of state or government and other leaders from Austria, Egypt, Italy and Laos will attend the forum. France, Germany, the UK, Spain, Japan, South Korea and the EU will send high-level representatives to the forum.
In addition, President of Laos Bounnhang Vorachith will pay a state visit to China.
The BRF is the highest level platform for international cooperation under the Belt and Road framework and is the most important event China will host this year, the foreign minister said.
Wang said that 126 countries and 29 international organizations have signed cooperation agreements with China to jointly build the Belt and Road.
He revealed that the total trade volume between China and participating countries has surpassed six trillion U.S. dollars, investment has exceeded 80 billion U.S. dollars and the 82 cooperation parks built by China and relevant countries have created nearly 300,000 jobs, bringing enormous development opportunities for the countries involved and laying a solid foundation for China to host the second forum.
"Over the past two years with concerted efforts, the Belt and Road is becoming a clean road for cooperation, prosperity, openness, green development and win-win outcome that will benefit people of all countries," he said.
CGTN
Share 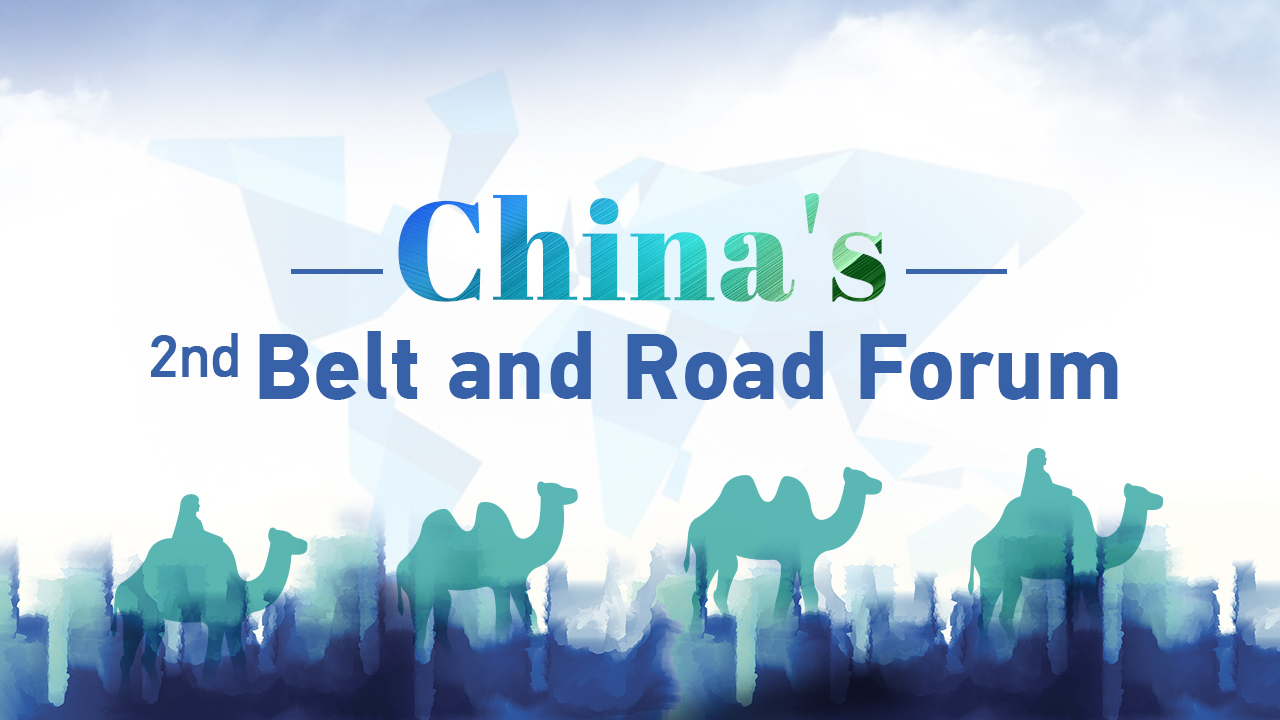 With only one day left for the second Belt and Road Forum (BRF) for International Cooperation, CGTN compares the key information of the second forum with the last one in 2017.
More world leaders – heads of state and government from 37 countries, the secretary-general of the UN and the managing director of the International Monetary Fund – will be attending the forum, far exceeding the number at the first forum. 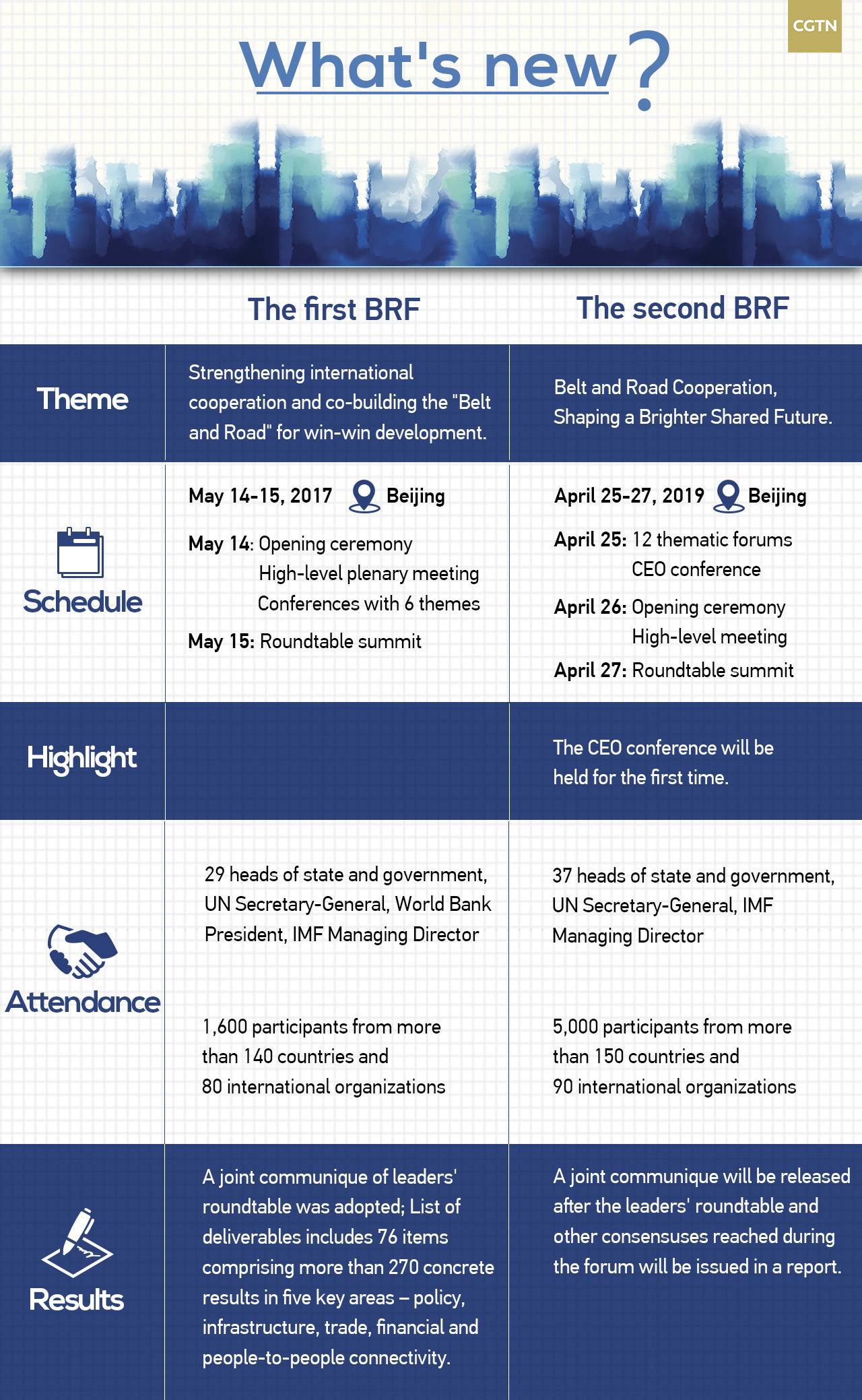 As Chinese State Councilor and Foreign Minister Wang Yi put it at a press briefing last week, fruitful results have been yielded since the initiative was launched in 2013, as 126 countries and 29 international organizations have signed BRI agreements with China, and the second BRF was greatly welcomed worldwide with some 5,000 participants from more than 150 countries and 90 international organizations having confirmed their attendance.
Read more:
Second Belt and Road Forum to be held April 25-27 in Beijing
This year's forum will have 12 thematic forums, twice that during the first forum in 2017, and the CEO conference will be held for the first time. A joint communique will be released after the leaders' roundtable and other consensus reached during the forum will be issued in a report.
RELATED STORIES 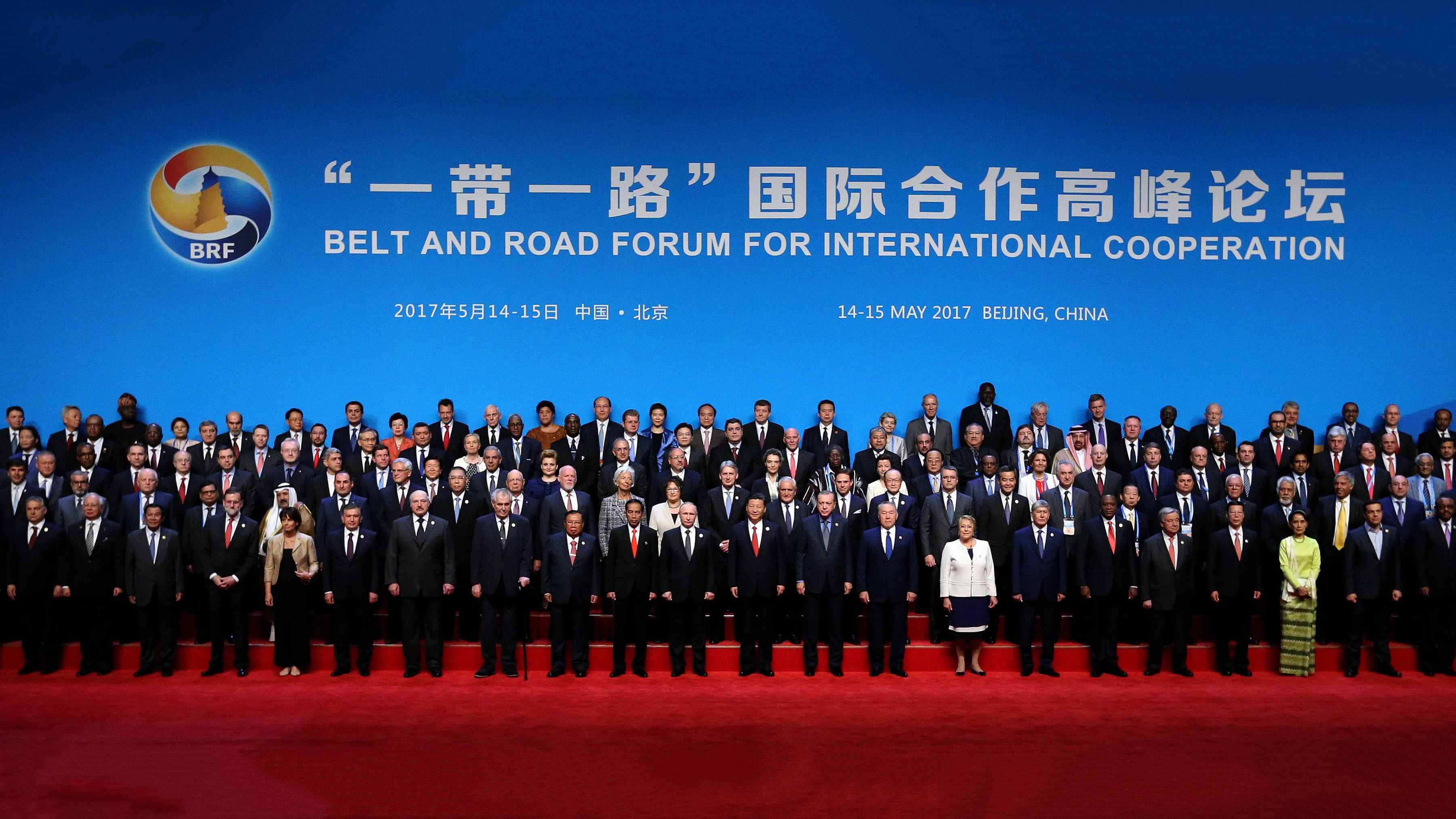 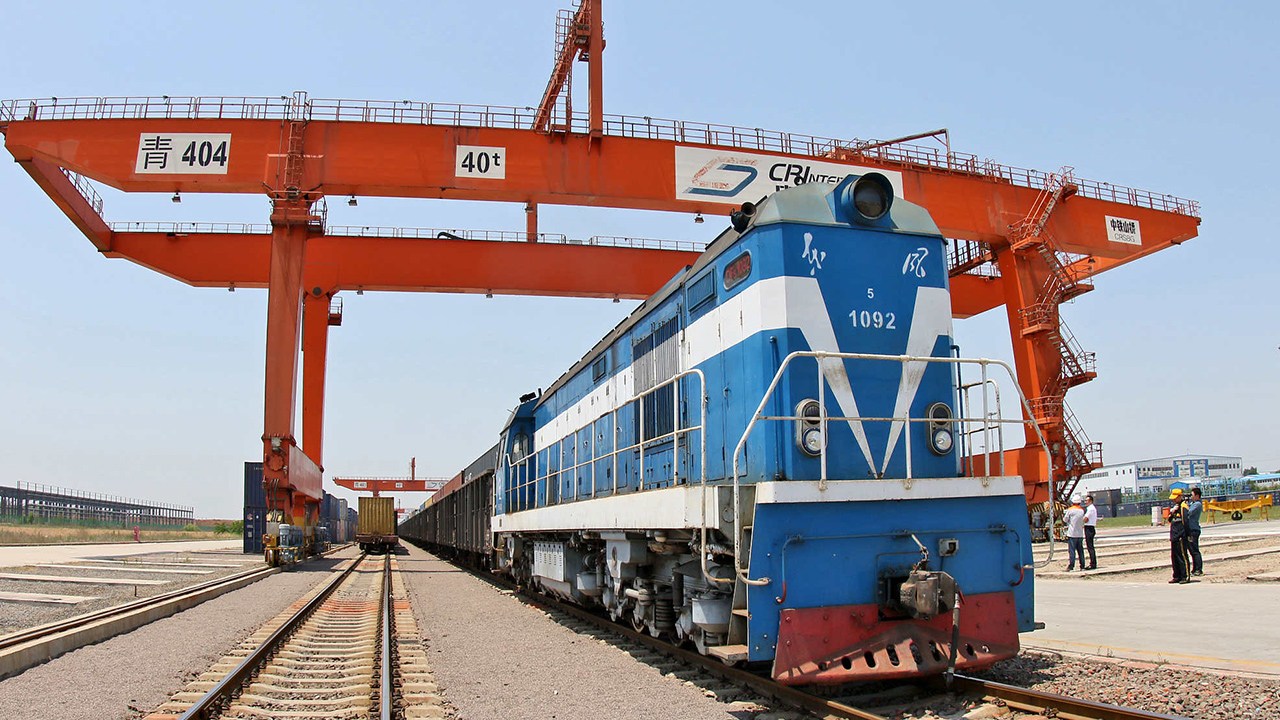 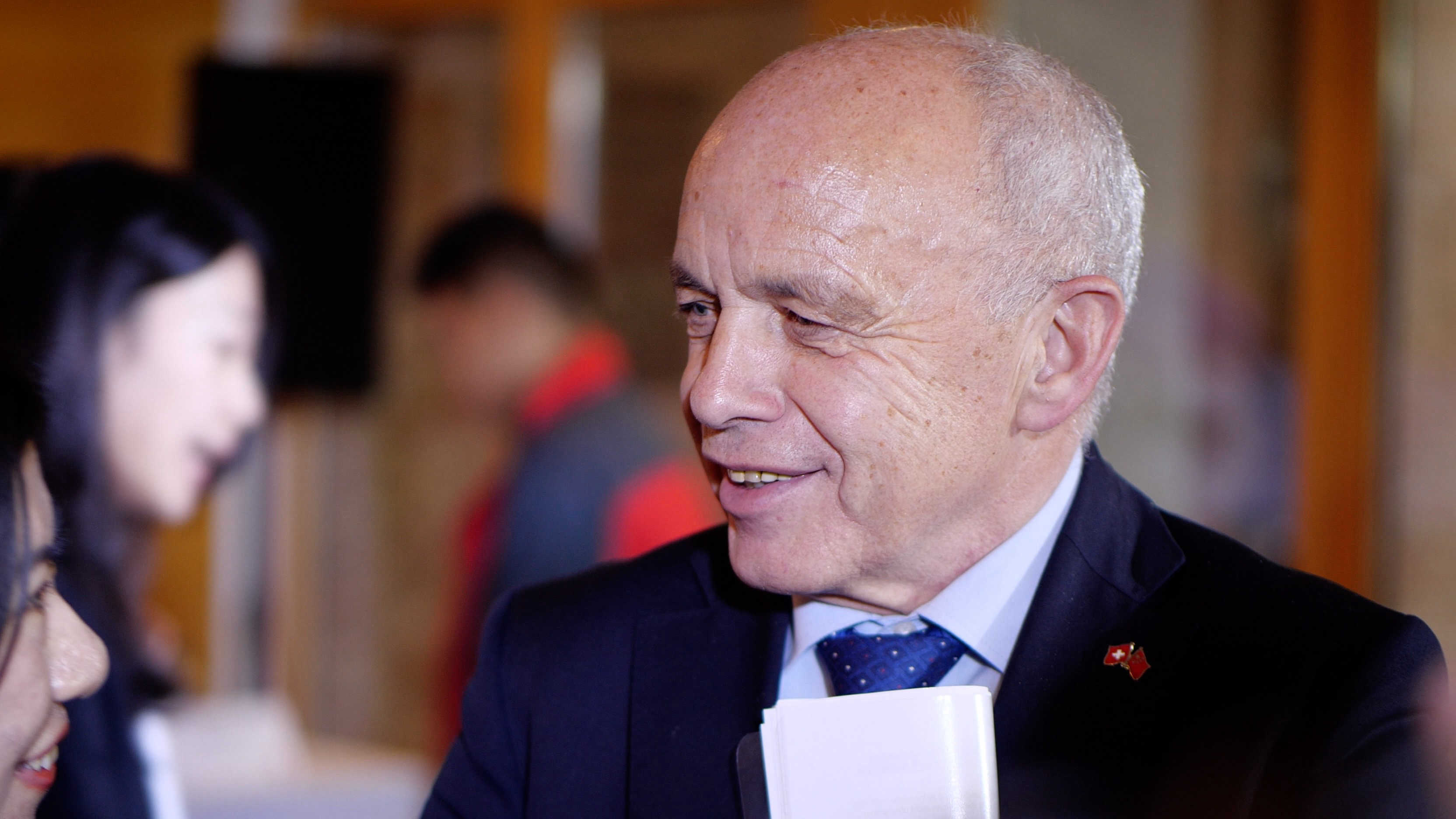 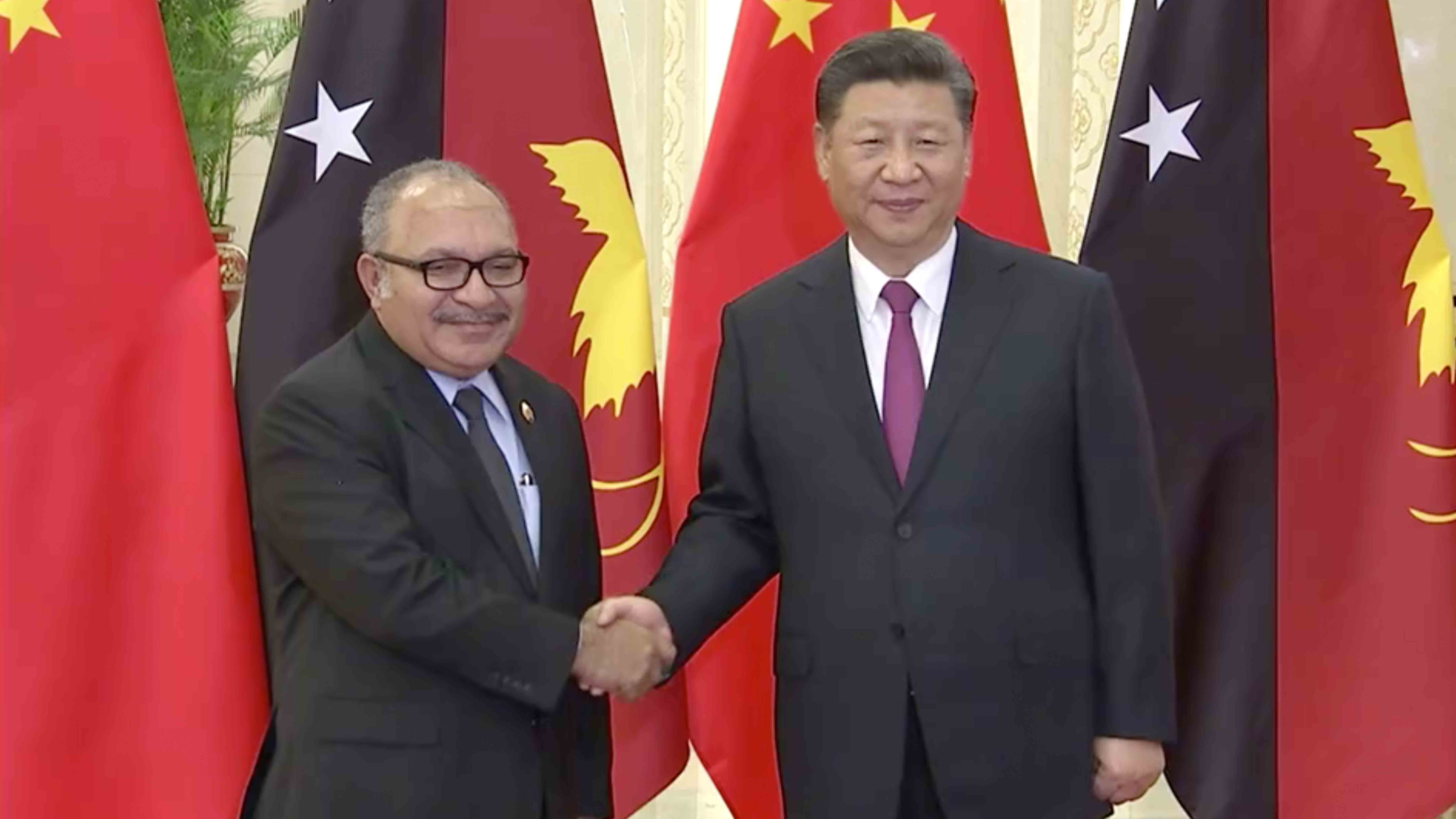 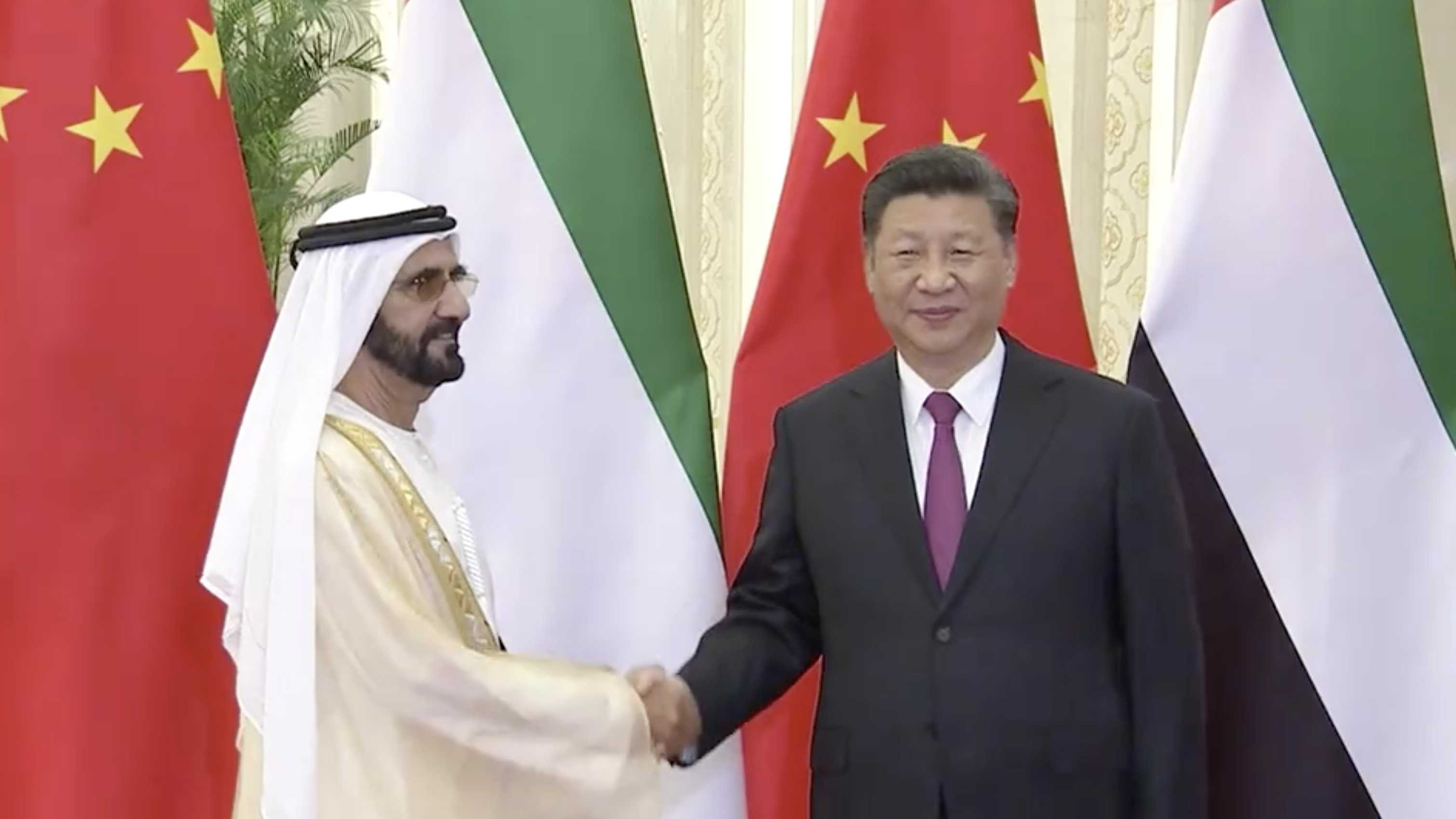 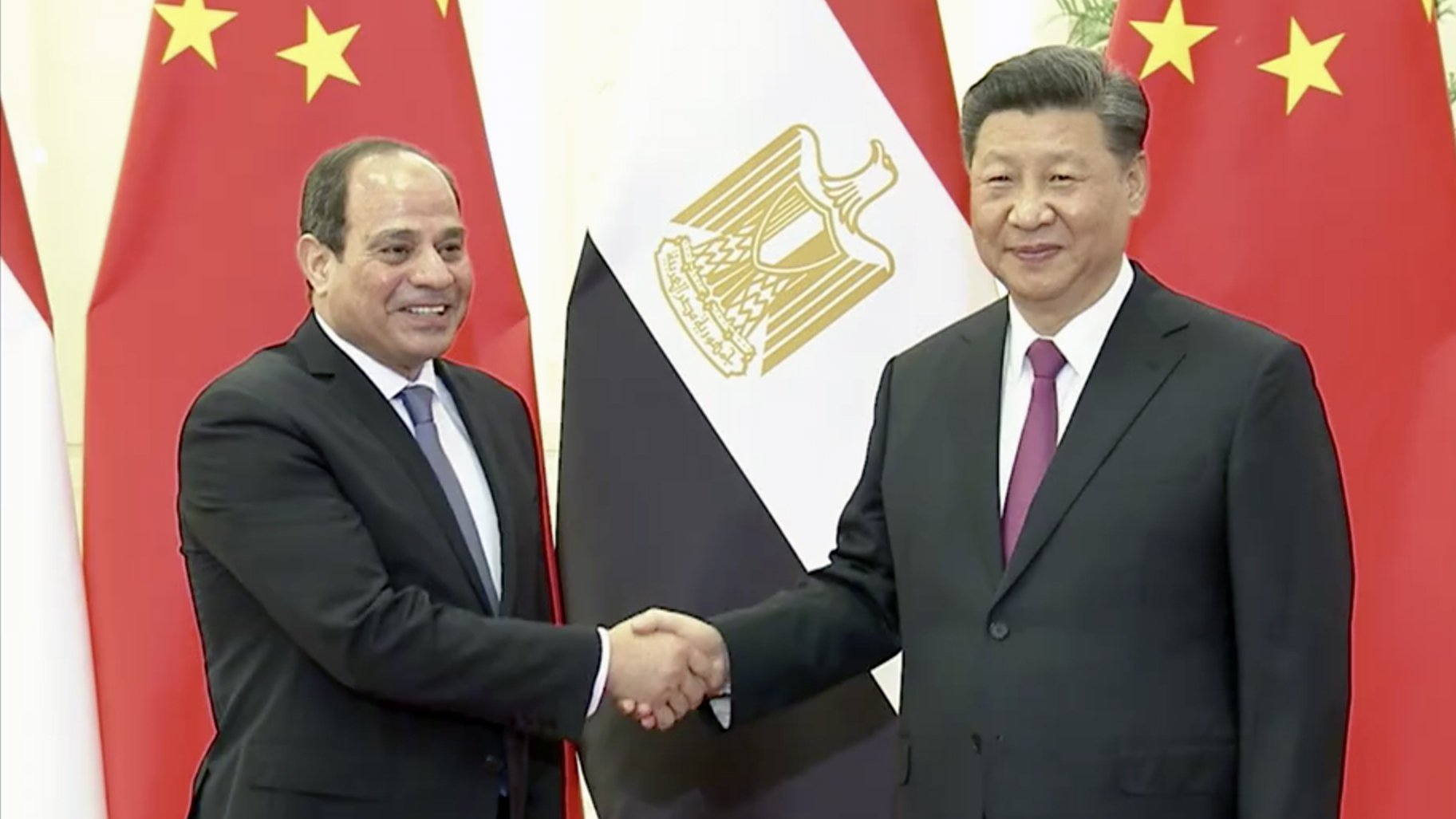 China and Egypt vow to further coEgypt/china cooperate on BRI

Around 1500 the human race needed new trading maps as awareness grew that the world was round. Since 1946 our human race has spent 1000 times more on communications technologies. This Entrepreneurial Revolution make new mapping essential for every enterprising person -and every mentor of childrens futures - not just for infrastructure experts and public utilities.

If you are alive and learning today, you are part of the historic human race that spent 4000 times more money and time on worldwide communications than ever before.
....Ask yourself which markets does your knowhow participate in, or collaboratively search out joyful goodwill around. SO how purposefully do these markets' reality map the most sustainable impacts you and yours (including virtual networks and real communities) celebrate for future generations.?
Take fashion garments for example. We worldwide citizens could be proud that the world's poorest nation in 1972 is now the second greatest exporter. With Women4Empowerment, we could be celebrating how the people who produce these garments have predominantly been mothered by village women who were illiterate and suffering from having none of the infrastructure benefits ( electricity grids, running water, communications) that other places had gained from the industrial revolution. But then we in 2015, we cannot close our eyes to the reality that we still live in a world where 2 years ago over 1000 such brilliant young women were killed by a factory collapse. In other words the fashion markets shames us all starting with those it beautifies the most (fashion4development.com seeks to put this right at the start of each new UN year including september 2015's which the UN has stated as needing to be the most transformative in its existence if sustainability goals are to be empowered by millennials).
Today's future began in 1946: our human race started doubling these borderless spends every 7 years. By 2030, livelihoods ( and our species futures to be or not to be) will have exponentiailly linkedin 12 doublings (4096 value multipliers)- this entrepreneurails revolution has been mapped out of The Economist in 1972, IT WILL BE 10 times more exponentially impactful up or down than industrial revolution.

www.tandfonline.com/doi/pdf/10.1080/10705422.2016.1201563
by J Fan - ‎2016 - ‎Related articles
targeting errors, misuse of funds, and making poverty both shameful and attractive. Whether this program, or the coun-. tryLs economic growth in general, is the main force in poverty reduction is the question addressed in this article, analyzing data for the 592 poor counties. The response to the economic growth-policy ...

www.fao.org/docrep/ARTICLE/WFC/XII/0510-A3.HTM
Poverty is observable all over the world. As a developing country China has a huge population under thepoverty-line, which was 80 million and 592 poverty-stricken counties in 1993. An anti-poverty program (called `Eight-Seven Program' which means that China would eliminate poverty of about 80 million people in seven ...

www.globaltimes.cn/content/701105.shtml
Mar 20, 2012 - The country's task force for poverty alleviation Monday updated a list of 592 keycounties in the national program to reduce poverty, which are expected to receive billions of yuan in fiscal support from the government.

China should no longer have poor counties within 15 years: top ...

www.scmp.com › News › China
Mar 13, 2015 - Liu was quoted as saying. China has 592 counties that are officially designated as poorand 14 contiguous poor areas. The two categories had some overlap and covered a total of 832 ofChina's counties, he said.

In China, it pays big money to be an “impoverished” village — Quartz

https://qz.com/378805/in-china-it-pays-big-money-to-be-an-impoverished-village/
Apr 8, 2015 - That's because Xinshao now receives an extra 560 million yuan ($90 million) a year from Beijing, as the Economist points out in a recent story. The Chinese government funnels billions of yuan a year to 592 counties and 128,000 villages that compete to be officially recognized as poor.
FutureofBBC.com including global social value of public broadcasting
Hot from other economist journals valuing sustainability millennials
From EconomistEurope.com thank goodness for truth seekers of 2 very different traditions - Francis-Soros speak more goodwill swense than all the rest of the west's economists In the attached essay George Soros; coming up the pope's masterclass in POP - DC , New York, Phili- not since the founduing fathers has freedom and happiness been so humanly chartered. Quiz what big bankers 2 most life-changing moments came 16 years apart at first invitations to meetup with Soros and Pope Francis. What events are happening in the 2 weeks following the Pope'svisit where youth are chief guests in pitching social innovations- see economistamericas.com for live feeds//
exploring
Projects -Dubai and Chinese Youth 6000; mountain view and ihub africa hackathons on satellite elarning networks; concept break up of The Economist into 10 open learning university partnerships at sdame time as celebration transfer of financial times to oriental long view ownership
=======================================

chris macrae
blog on how will your life change world with global communications youtube washington dc 1 301 881 1655 email chris.macrae@yahoo.co.uk linkedin 9500 skype chrismacraedc home of the 64 trillion dollar colaboration map , of the 7 curriculum millions of youth most need at free online university to sustain net generation's next 3 billion jobs and end poverty goals - a project of Norman Macrae Foundation- The Economist's Pro-Youth Economist and faciliator of net generation's Entrepreneurial Revolution dialogues since 1972